Diocesan Pilgrimage to St Albans on Saturday 11th May 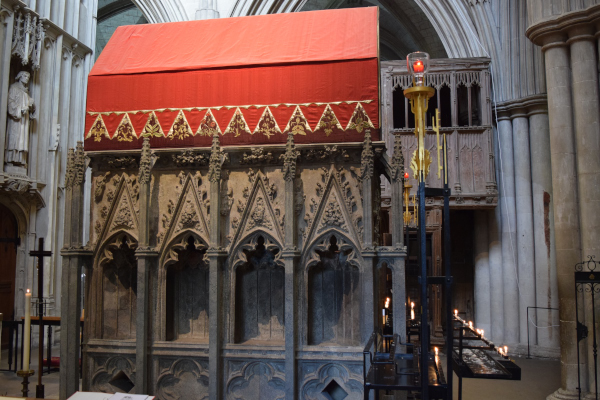 Reliquary of St Alban in the Cathedral.

On Saturday 11th May 2019, the Diocese will make its annual pilgrimage in the British Isles, to St Albans Cathedral. The site of the martyrdom of St Alban the Protomartyr of Britain will be marked by the service of the Divine Liturgy celebrated by His Grace Bishop Irenei of Richmond and Western Europe, together with various diocesan and guest clergy. The Liturgy will be followed by a moleben before the precious relics of St Alban.

The greeting of the hierarch will take place at 9.45 a.m. in St Albans Cathedral.

About the Protomartyr St Alban

Saint Alban (or Albanus), the protomartyr of Britain, was a Roman citizen who lived at Verulamium (modern Saint Albans), a few miles northwest of London, during a time of persecution. Nothing is known about his family or his occupation.

The chief magistrate of the city had orders to arrest all Christian clergy. One of them, a priest named Amphibalus, fled to Alban’s home in order to hide from the soldiers who wished to kill him. Alban was impressed by the priest’s constant prayer and vigil, and so he questioned Amphibalus about his beliefs. As a result, Alban came to believe in Christ and asked to be baptized.

Eventually, Amphibalus was forced to move on, and Alban changed clothes with him so that he could get away. The soldiers heard there was a priest hiding in Alban’s house, so they came to search it. Seeing Alban dressed in the priest’s clothes, they arrested him and brought him before the judge.

The magistrate was offering sacrifice to idols when Saint Alban appeared before him. After questioning him, he discovered how Alban and the priest had switched clothes. Furious because Alban had allowed a fugitive to escape, the magistrate threatened him with death unless he returned to paganism and revealed where Amphibalus had gone. Saint Alban replied, “I am also a Christian, and I worship the true God.”

After having the saint beaten and tortured, the magistrate threatened him with execution. Saint Alban rejoiced and glorified God. The magistrate ordered the soldiers to take Saint Alban to the Holmhurst Hill to be beheaded. When they came to the river Ver, they saw that the bridge was crowded with people who had come to witness Alban’s martyrdom. Since they could not proceed because of the multitude of people, Saint Alban prayed and made the Sign of the Cross over the river. At once, the waters parted so that they were able to cross over to the other side.

The executioner was so astonished by the miracle that he threw down his sword and refused to behead the saint. He was arrested, and another man was found to behead them both. There is a tradition that Saint Alban became thirsty while climbing the hill and asked for water. A small spring gushed forth near the top of the hill, and he was able to drink from it. Pilgrims used to come and drink from Saint Alban’s well, but it is now dry.

The date of Saint Alban’s martyrdom is uncertain, but it is believed that it took place during the reign of Decius (ca. 251) or Valerian (ca. 257). The eighteenth century Turin manuscript (which may be based on a fifth century source) suggests that Saint Alban may have been executed as early as 209, when the emperor Septimus Severus and his two sons were in Britain. The name of the executioner who was converted has not been preserved. The priest Amphibalus was ultimately caught and put to death at a place called Redbourn, four miles from Verulamium.

When people began to cry out against the magistrate, he put an end to the persecution. In later years a cathedral was built on the site of the martyrdom, and the relics of Saint Alban, the priest Amphibalus, and perhaps even the executioner were enshrined within. Saint Bede (May 27) tells us that miracles frequently took place at Saint Alban’s tomb. When the Danes invaded England in 860, the relics were removed for safekeeping, then later returned.

A new chapel and shrine were built for the relics in the early fourteenth century. Two hundred years later, during the dissolution of the monasteries under Henry VIII, the marble shrine was destroyed. Much later, the fragments of the shrine were reassembled on its former site.