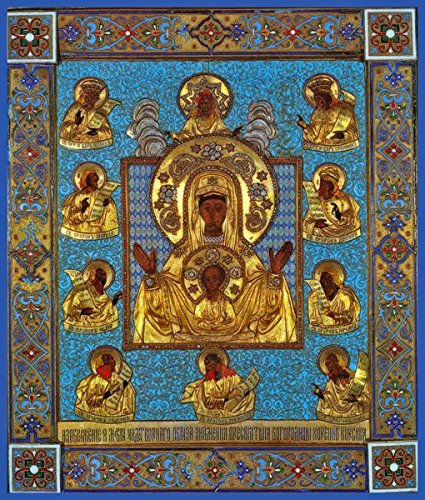 With the blessing of the Holy Synod of Bishops, from 26th March to 21st April 2019 the wonderworking Kursk-Root Icon of the Mother of God ‘Of the Sign’ has made an historic visit to Great Britain and Ireland. While this chief icon of the Russian Orthodox Diaspora has visited Great Britain several times, it has been many decades since there has been such a lengthy and extensive visitation throughout the territory of the Diocese — a visit that has been welcomed by throngs of faithful. In a time of spiritual turmoil and challenges to Christian unity, the presence of the Kursk-Root Icon has been a sign of the tangible grace of God, and the unity provided by the faithful adherence to His truth: even as the Saviour said in reference to His holy mother: Blessed are those who hear the word of God, and keep it (Luke 11.28).

The wonderworking icon arrived on 26th March with His Grace Bishop Nicholas of Manhattan, Vicar Bishop of the Eastern American Diocese and the icon’s dedicated caretaker, and was greeted at London’s Diocesan Cathedral of the Nativity of the Mother of God with flowers and a service of the Akathist to the Theotokos, followed the next morning by the Divine Liturgy of the Presanctified Gifts celebrated by His Grace Bishop Nicholas with clergy of the Cathedral, in the presence of the holy icon. The icon then remained in the Greater London area for almost a week, being taken by clergy to visit and bless the homes of parishioners (as is the longstanding custom of our Church, when the Kursk-Root icon visits a Diocese) as well as the sick and elderly. On Saturday 30th and Sunday 31st March (the Sunday of the Adoration of the Cross), the icon was present in the London Cathedral for both Liturgies, and was venerated by hundreds of parishioners — and especially children and young people from the parish school and its families — as well as attracting faithful from many other jurisdictions and parishes throughout the Greater London region. From Tuesday 2nd April through the following weekend the holy icon visited the east of England, including visits to Felixstowe and Colchester, Bury St Edmunds, Medlesham and Wisbech, Witham, Chelmsford, Brentwood, Basildon, Romford and Ilford, Frinton, and the Diocese’s small monastic chapel of St Panteleimon at Clacton-on-Sea. Some 38 molebens were served in these various locations across the week. On Saturday 6th and Sunday 7th April the holy icon was present in the Parish of St John of Shanghai in Colchester for the Vigil and Liturgy of the Sunday of St John of the Ladder, which this year was also the Feast of the Annuncation of the Mother of God — and the parish was flooded with hundreds of faithful who came to pray to the Mother of God and receive the sacraments of her Son in the presence of this great gift of grace.

The icon was then brought to the region of Norfolk and environs, first to the parish in Norwich, then to Mettingham and the historic Orthodox shrine to the Theotokos in Walsingham, as well as Bungay. The icon was again brought to many homes, as well as to bless monastic dwellings. In the church of the Mother of God ‘Joy of All Who Sorrow’ in Mettingham the icon was present at the service of Great Compline and the Canon of St Andrew of Crete, celebrated during the Fifth Week of Great Lent. Visits were also made to Winterton on Sea, and Garboldisam before returning to the London Cathedral on Saturday, 13th April to be present for the Divine Liturgy and general service of Holy Unction, celebrated by His Grace Bishop Alexander, Vicar Bishop of the Diocese, together with diocesan clergy. The icon was then brought to the north of England, to visit St Elizabeth’s parish in Wallasey near Liverpool from 14th April. Its time in the north included molebens, akathists and home visits in St Helens, Aston in Makerfield, Ormskirk and Southport, before then travelling on 17th April, after the Presanctified Liturgy, to mid Wales. From 18th April the Kursk icon will visit the Diocese’s parish in Cardiff, as well as faithful in Llanelli and the surrounding regions; and will be present in Cardiff for the Divine Liturgy of Lazarus Saturday. It will then travel to Stradbally, near Dublin; and finally to the Dublin Parish of Sts Peter and Paul on Palm Sunday as its final stop before returning to New York to be present in the Synodal Cathedral — the icon’s permanent home — for the remainder of Holy Week and Pascha.

While the Diocese’s parishes have opened up their doors to Orthodox faithful from many other parishes during the holy icon’s visit, a special blessing was given by His Grace Bishop Irenei for clergy to bring it also to three parishes of the Diocese of Sourozh, that the deep veneration held for this chief icon of the Church Abroad could be expressed by the faithful there. The icon visited the Sourozh Cathedral of the Dormition in London on 30th March, as well as the Parish of St Nicholas the Wonderworker in Oxford on 13 April and the Parish of the Protection of the Theotokos in Manchester on 14th April.

As when the myrrh-streaming ‘Hawaiian Icon’ of the Mother of God was brought to the Diocese in 2017, the present visit of the Kursk-Root Icon has brought with it many miracles of healing and a renewal of faith in troubled times, as well as presenting for all devout faithful an image of piety and devotion to Christ, encapsulated in the image of His mother, who always shows ‘the way’ to redemption and unity in the Divine Will of her Son. 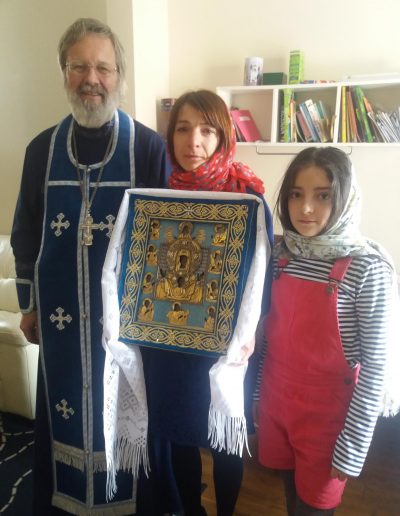 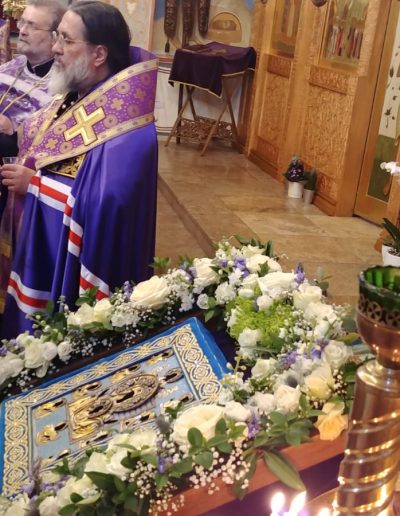 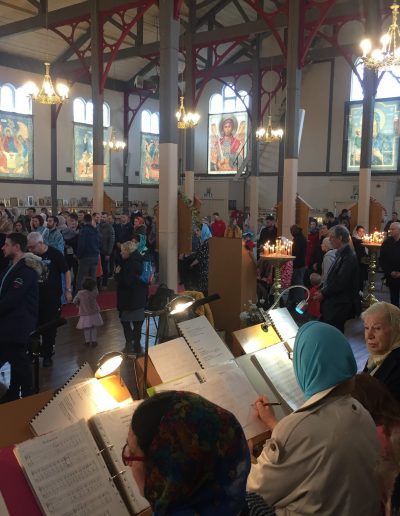 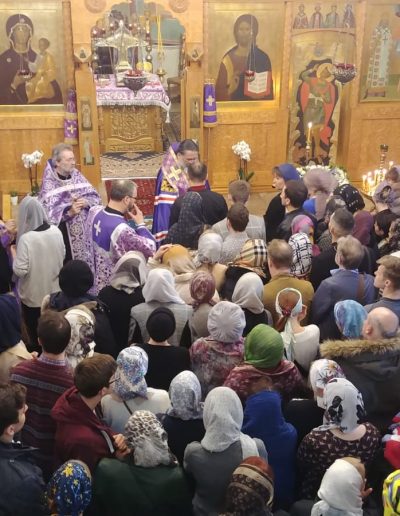 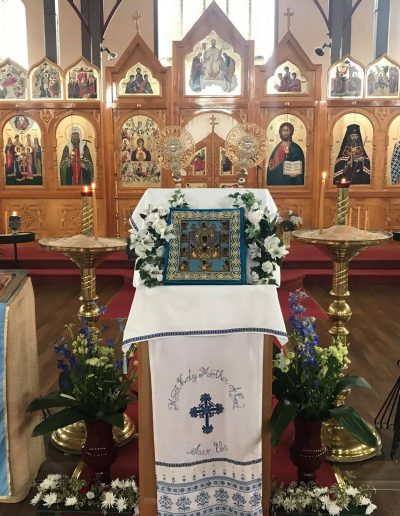 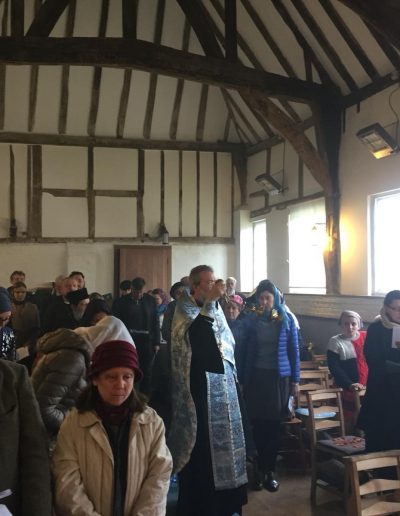 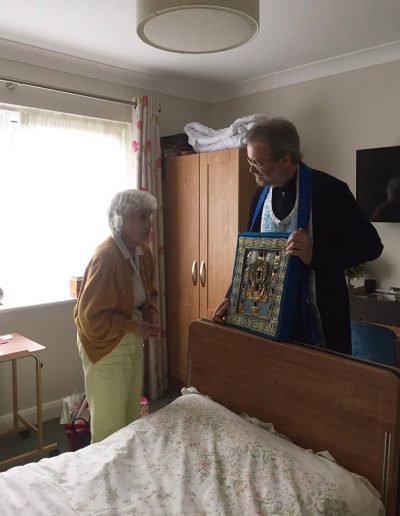 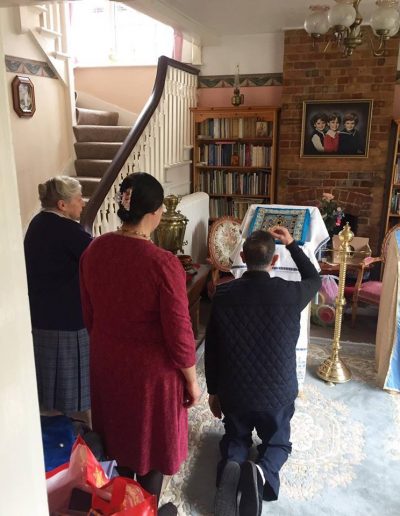 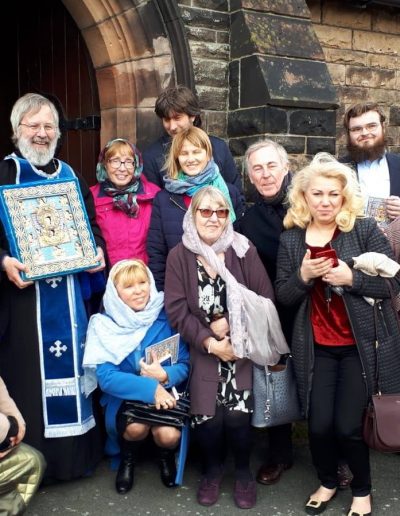 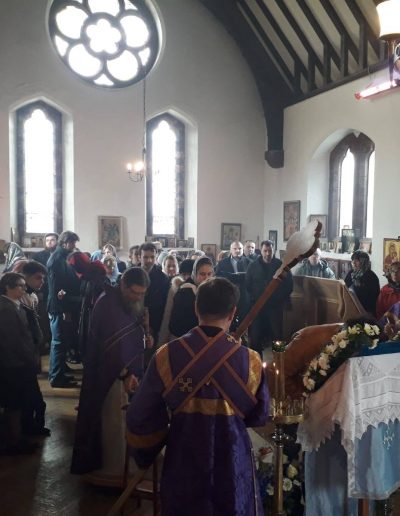 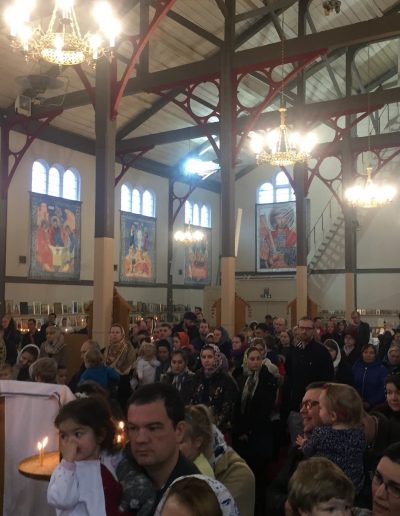 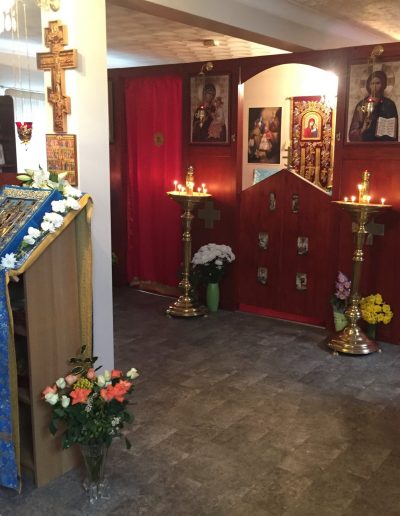 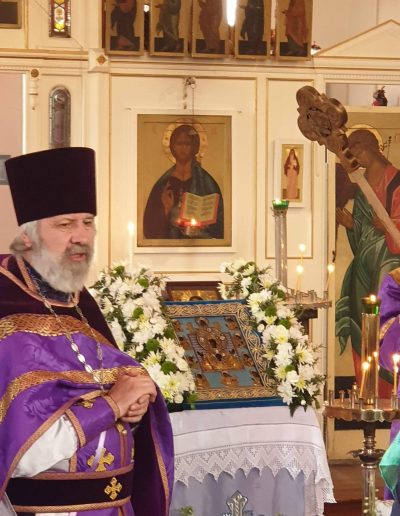 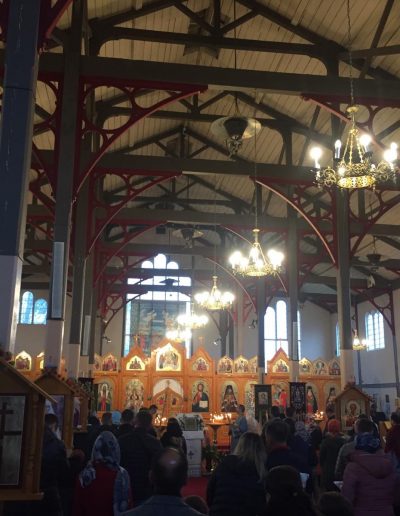 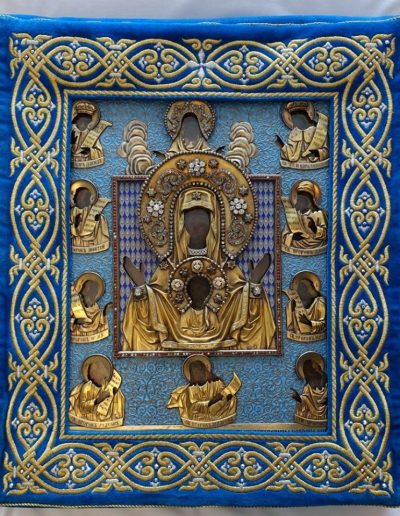 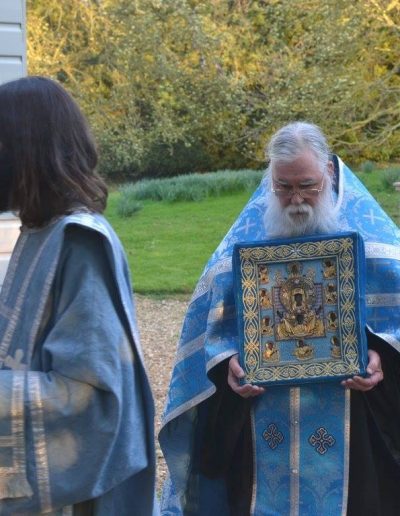 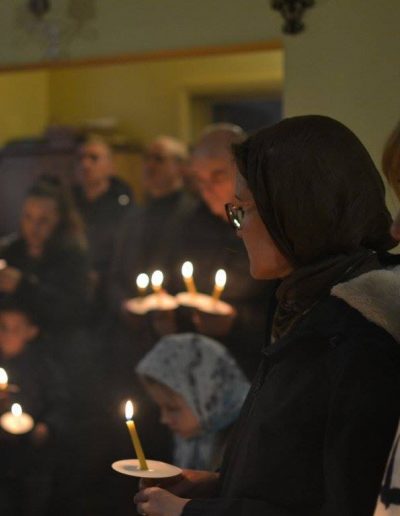 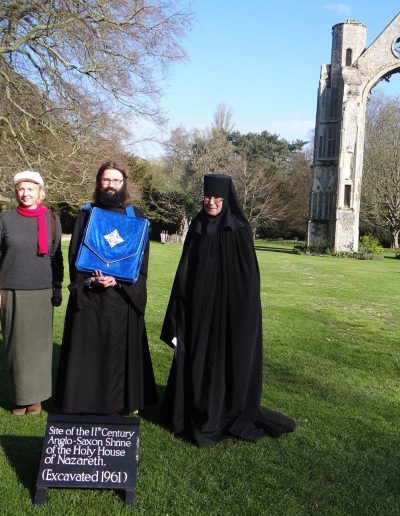 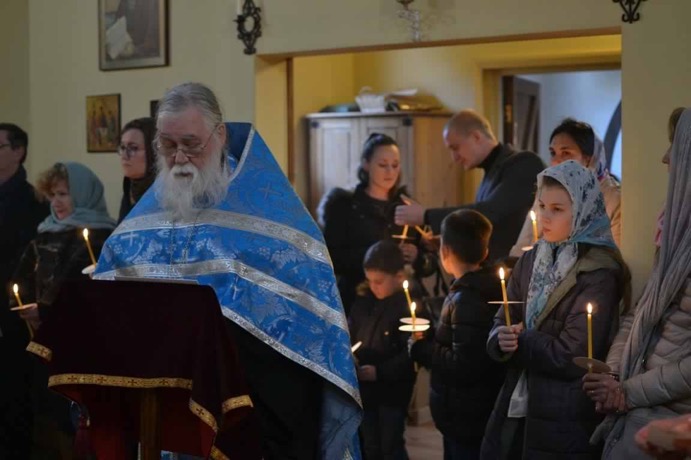 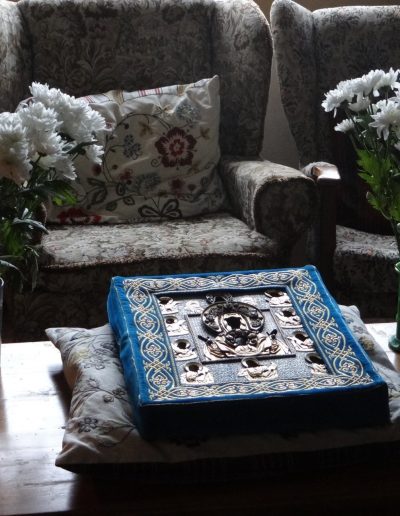 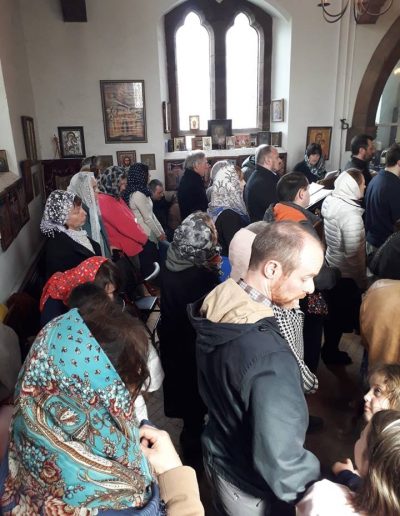 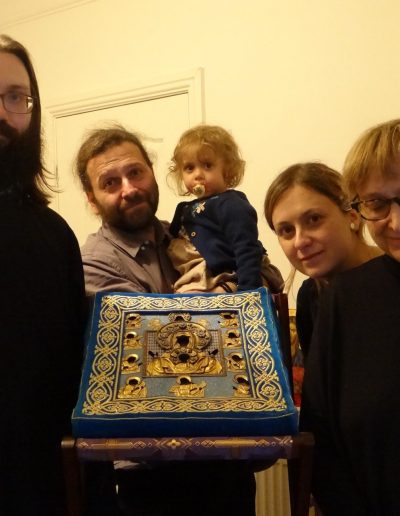 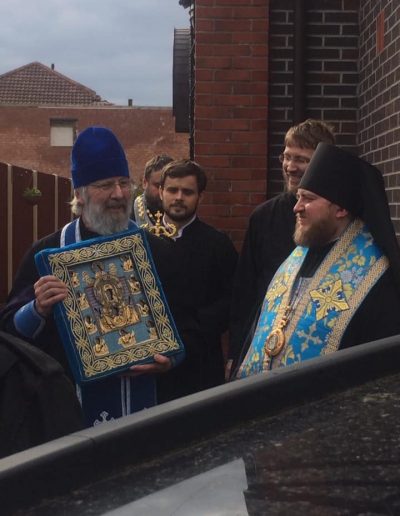 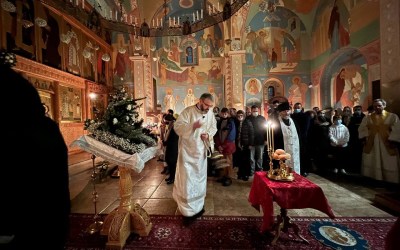 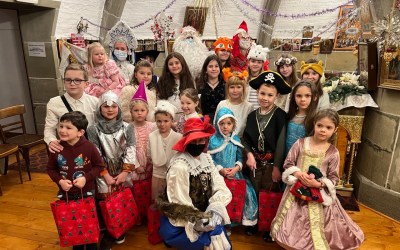 In keeping with a fond tradition of the Church Abroad, various parishes of the Diocese organise children’s musical concerts and pageants during the season of the Nativity of Christ. | По доброй традиции Зарубежной Церкви, различные приходы епархии организуют детские музыкальные концерты… 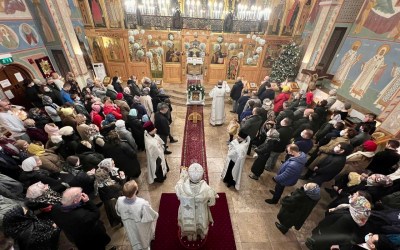