The Feast of the Kazan Icon is celebrated in Wallasey by Bishop Irenei, marking the 10th Anniversary of St Elisabeth’s Parish 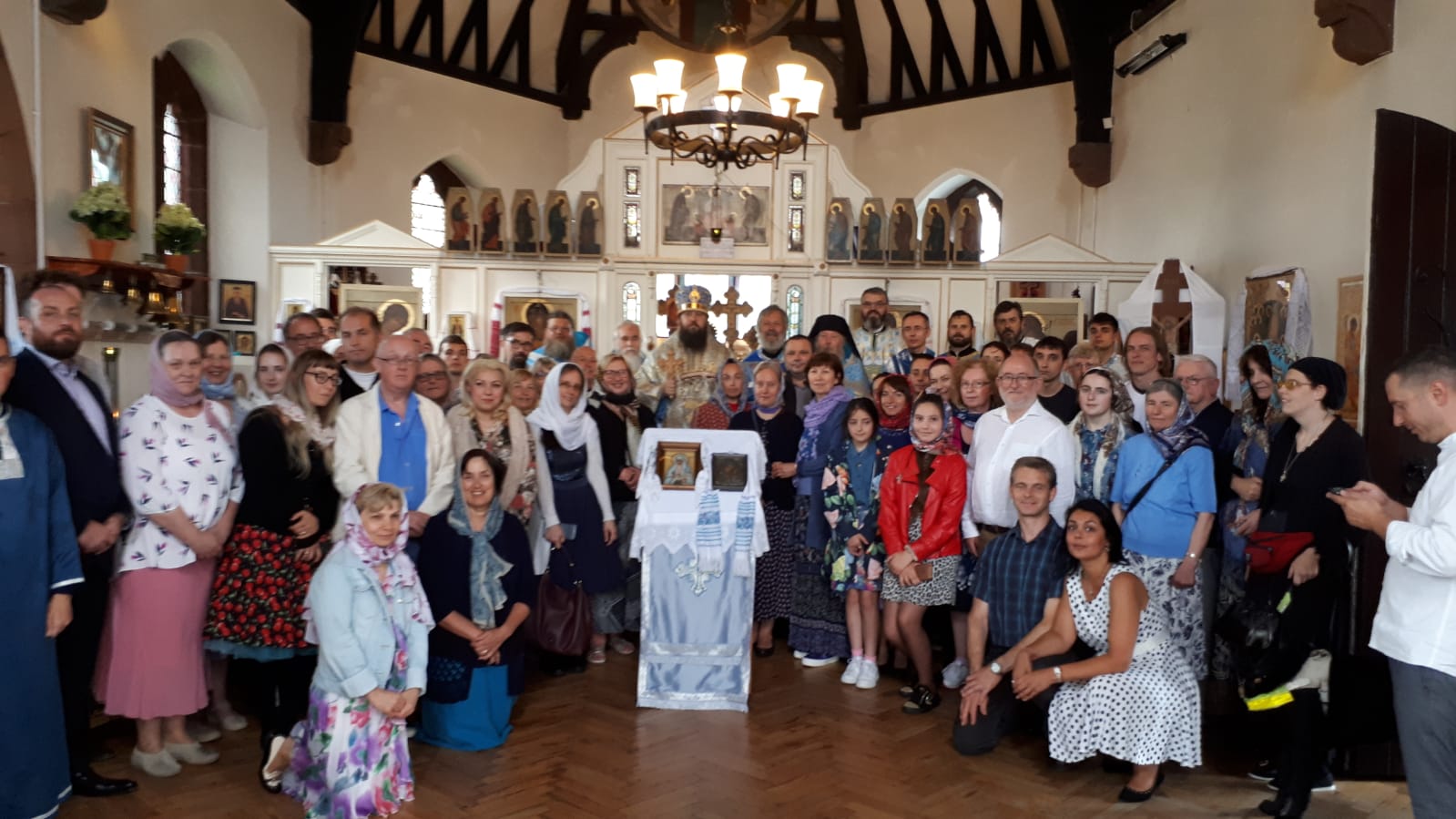 SUNDAY 8th / 21st JULY 2019: On the Feast of the Kazan Icon of the Mother of God, His Grace Bishop Irenei of London and Western Europe served the Divine Liturgy in honour of the Kazan icon of the Theotokos at the Parish of St Elisabeth the New Martyr in Wallasey, near Liverpool in England. On the day the memory of St Elisabeth was also marked (translated from her feastday on Thursday the 5th / 18th) — the patroness of the parish which thus kept its Altar Feast in conjunction with the feastday of the Mother of God. The occasion marked the tenth anniversary of the parish moving into its present cemetery temple, where its life has flourished over the succeeding decade. The evening services on the Eve were kept in the ‘Little Church of St Elisabeth’ in the parish house, with the Divine Liturgy in the main temple.

A large congregation gathered to welcome His Grace to the parish, who was met at the door with the traditional bread and salt by the parish trustees. Serving with the Bishop in the Altar were the parish rector and Chancellor of Great Britain and Ireland, Archpriest Paul Elliott, together with Archpriest Luke Holden, Hieromonk Mark (Underwood), Priest Spiridon Bailey and Deacon Andrei Borisas — all clerics of the Diocese — together with a host of subdeacons, readers and Altar servers.

At the Sixth Hour Nicholas Corbett was raised from the rank of Reader to Subdeacon, to continue to serve in St Elisabeth’s. At the Little Entrance, His Grace, acting on behalf of the Holy Synod of Bishops, awarded Father Paul the right to wear the Palitsa on account of his many years of service and labours for the Church, both in the parish and surrounding areas as well as throughout the Diocese. The singing for the service was conducted reverently by Matushka Elisabeth Elliott. At the conclusion of the Liturgy His Grace preached a sermon on the joint commemorations of the service, and how each person is called to become himself a living temple of God, following the example of His Mother.

Faithful came from throughout the British Isles to take part in the anniversary, with guests and pilgrims from Cheltenham, Cardiff, London, Telford, Manchester, Chester, Stradbally (Ireland) and elsewhere joining the local parish community for worship and prayer. Especially warmly received were the nuns Helen and Olga from the Convent of St Elisabeth in Minsk.

Following the Divine Liturgy the traditional Cross Procession was held around the Church, in honour both of the Kazan icon of the Mother of God and St Elisabeth. Upon re-entering the Church and concluding the moleben with the three-fold ‘Many Years’ intoned by Deacon Andrei, Bishop Irenei greeted the parish and congratulated its faithful and its rector, who in turn expressed the community’s joy in these past ten years of life in the Diocese, as well as his own personal gratitude to God, his matushka and his spiritual children for their love and devotion to Christ.

Hieromonk Mark, rector of the Kazan icon parish in Cardiff (who had come up on this translated feastday to be present for the occasion, together with other members of the parish), presented Archpriest Paul a stained-glass icon of Sts Elisabeth and Barbara. Following the veneration of the Cross and memorial prayers, the clergy and faithful were warmly received at the parish house for a garden party. 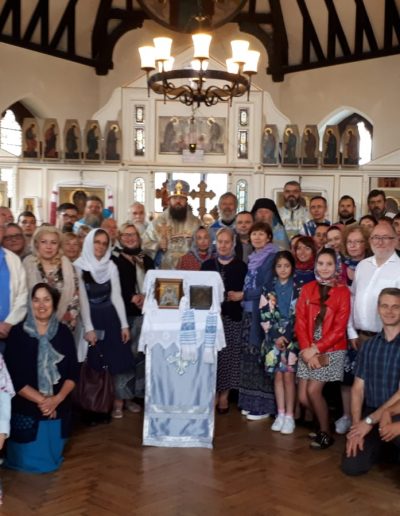 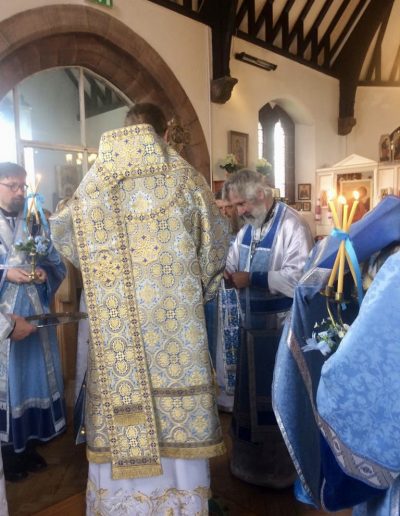 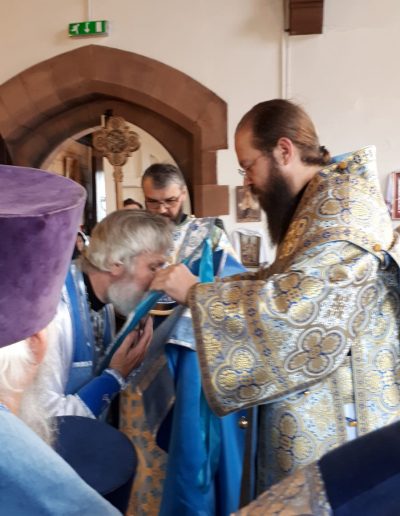 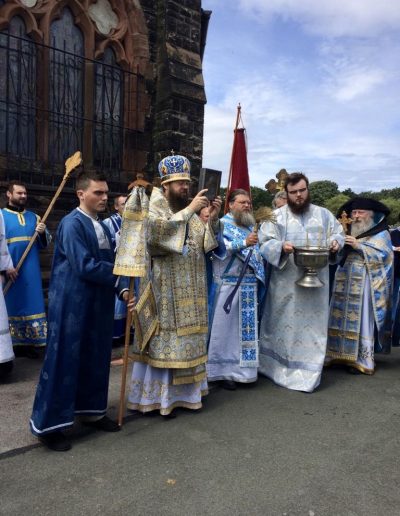 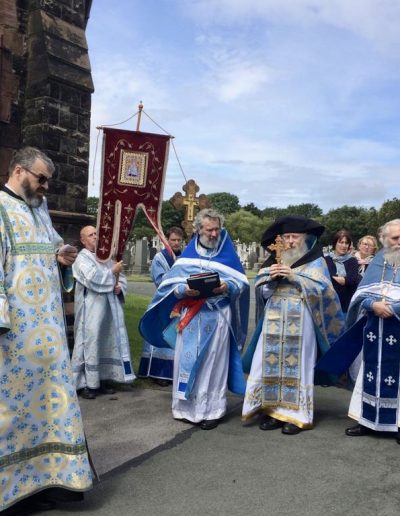 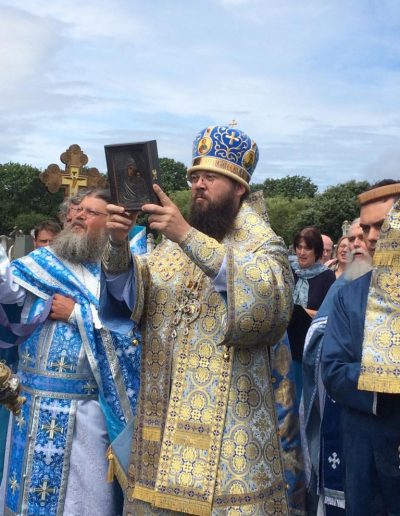 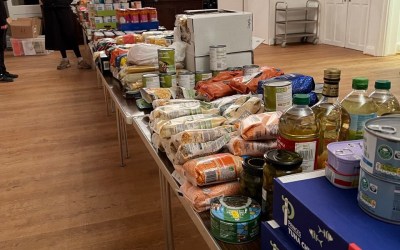 The Cathedral Parish Council has begun operation of a local Food Bank, collecting non-perishable foods from parishioners, benefactors and charitable organisations, to be organised into boxed parcels to be collected by any who are in need of a little additional help during the cost of living crisis. 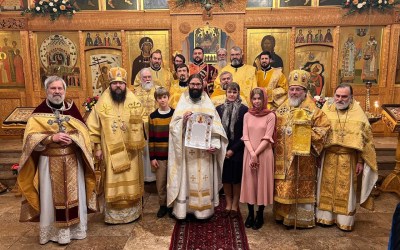 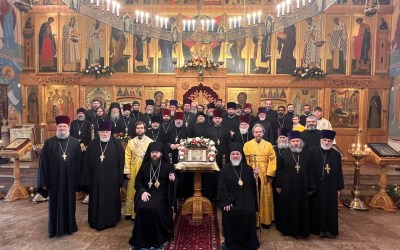