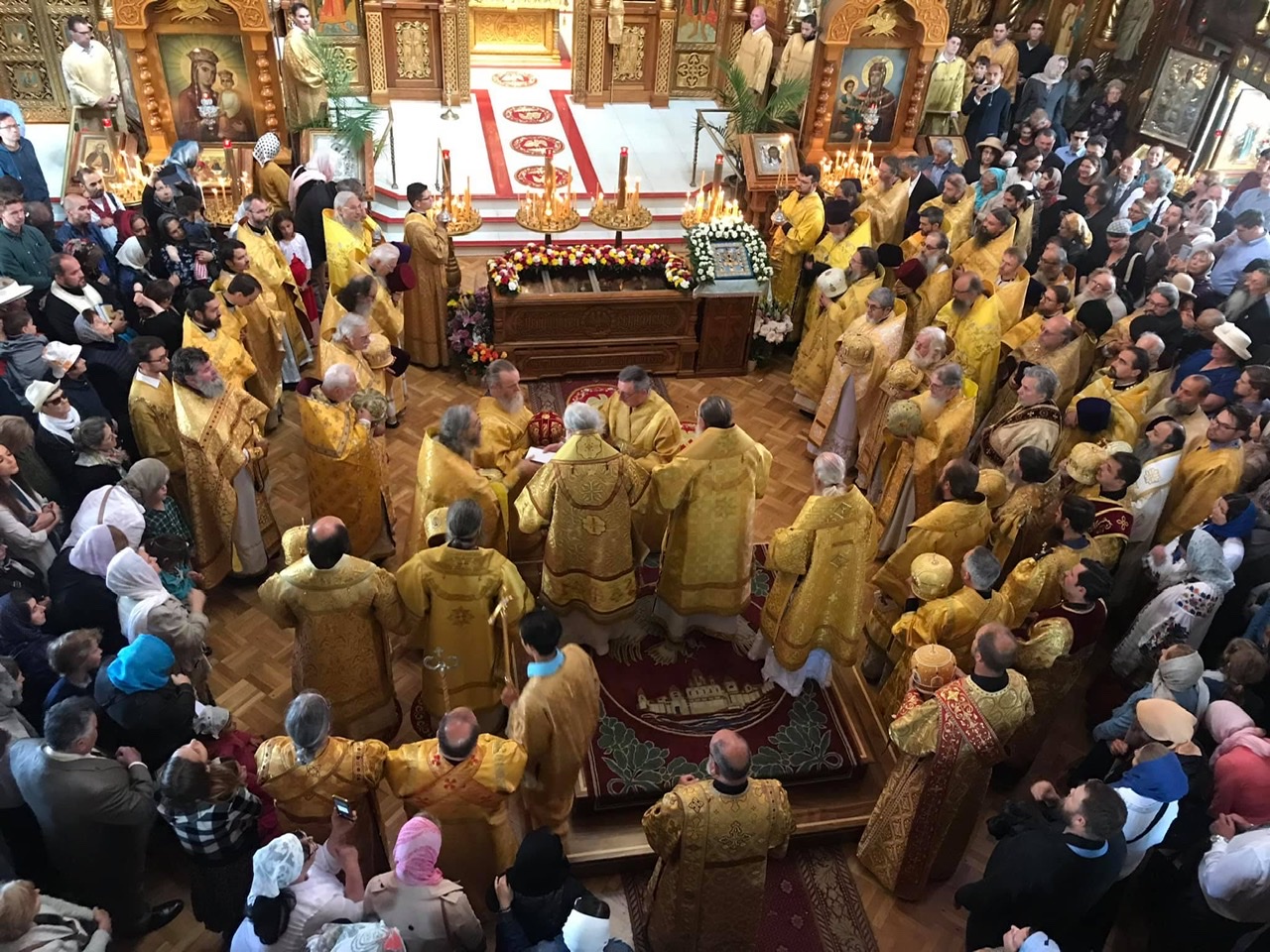 A Regular Session of the Holy Synod of Bishops of the Russian Orthodox Church Outside of Russia took place in San Francisco, California, from 27th-28th June 2019, in conjunction with the 25th anniversary of the glorification of St John the Wonderworker of Shanghai and San Francisco, who from 1953 to 1962 served as the Ruling Archbishop of our Diocese. His Grace Bishop Irenei, who as Synodal Secretary for Inter-Orthodox Relations of the Church Abroad is a regular member of the Holy Synod, took part in its meetings under the presidency of the First Hierarch, His Eminence Metropolitan Hilarion of Eastern America and New York, together with other members of the Holy Synod: His Eminence Archbishop Mark of Berlin and Germany, His Eminence Archbishop Kyrill of San Francisco and Western America, His Eminence Gabriel of Montreal and Canada and His Grace Bishop Nicholas of Manhattan. His Grace Bishop Theodosy of Seattle also took part in the meetings. As is customary, the Holy Synod met before the Kursk-root icon of the Theotokos, directress of the Russian Diaspora. (Scroll down on this page for a gallery of photographs.)

At its session on Wednesday, the Holy Synod confirmed its decision to unite the Diocese of Western Europe and the Diocese of Great Britain and Ireland into a single Diocese of Great Britain and Western Europe — a process already begun in its deliberations at the session of the Synod held in London in September 2018. In thus bringing together the two territories which, over the past century, have sometimes been a single entity and at others (as more recently) separate, the Holy Synod has brought into closer spiritual fraternity the parishes and communities of these regions that have been spiritually linked together for centuries — whilst also affirming that their unique characteristics will continue to be cared for by the preservation of distinct administrations in each broad territory (Great Britain and Ireland on the one hand, and Continental Europe on the other).

During the same session, the Holy Synod also confirmed a decision previously taken by the Sobor of the Bishops of the Church Abroad, to return to the ROCOR’s earliest usage for the title of the see in England: namely, ‘Bishop of London’. Bishop Nicholas (Karpoff), who was consecrated by Metropolitan Anthony (Khrapovitsky) of blessed memory in June 1929 to oversee the communities in the United Kingdom, held the title ‘Bishop of London’ until his repose. Later hierarchs were given the title ‘Bishop of Richmond,’ which our present Ruling Bishop has borne since his appointment to the See in September 2018 (having formerly been Bishop of Sacramento). From its present decision the Holy Synod has restored the Church’s earlier usage, and henceforth our Ruling Bishop shall be commemorated as ‘His Grace Bishop Irenei of London and Western Europe’ (click here for details and full text of commemorations).

During its sessions, the Holy Synod considered various aspects of Church Life throughout its dioceses across the globe, as well as matters relating to theological education and the good works undertaken at its seminary; missions in various parts of the world; the development of monasticism in divers regions; preparations for the 100th anniversary celebrations of the ROCOR next year; and various other matters. The Hierarchs also prayed for the soul of the recently-departed Archbishop Alypi, former Ruling Bishop of Chicago and Mid-America, whose departure unto the Lord had taken place since the Synod’s last meeting.

Following the conclusion of its sessions, the members of the Holy Synod, together with guest hierarchs from Russia and Romania, took part in the Divine Services for the feast of St John of Shanghai and San Francisco. This year marks twenty-five years since the glorification of St John took place in the Cathedral of the Holy Virgin in San Francisco, where his incorrupt relics remain, and for the feast those relics were brought into the centre of the temple as hundreds of pilgrims from all over the world arrived to prayerfully seek the saint’s intercession and healing. On Thursday evening His Grace Bishop Irenei and His Grace Bishop Nicholas of Manhattan led the Akathist to St John before his relics; and on Friday evening and Saturday morning the whole Synod with guests and visitors celebrated the Vigil and Divine Liturgy of the feast, under the presidency of the First Hierarch with over sixty clerics serving an exceedingly full church. At the Little Entrance of the Divine Liturgy, Abbot James (Corazza) of the Western American Diocese was elevated to the rank of Archimandrite, and Priest Sergei Kiryuhin of Holy Virgin Cathedral in San Francisco was awarded the Gold Cross. His Grace Bishop Irenei preached the sermon on St John’s testimony of the power of spiritual transformation in the modern world, and at the conclusion of the Liturgy a festal procession was held around the Cathedral. During his remarks from the amvon following the Divine Services, His Eminence the First Hierarch bestowed a personal award upon His Eminence Archbishop Kyrill of San Francisco, and the Award of St Elizabeth the New Martyr upon Archbishop Kyrill’s vicar, His Grace Bishop Theodosy of Seattle, for the labours of both hierarchs of the Diocese in this anniversary year.

His Grace Bishop Irenei will serve on Sunday, 17th / 30th June at the Parish of St Tikhon of Zadonsk, the former orphanage run by St John in California as well as the saint’s residence, where Bishop Irenei served for many years as a priest. He will depart from California in the new week to take up his residence in our Diocese. 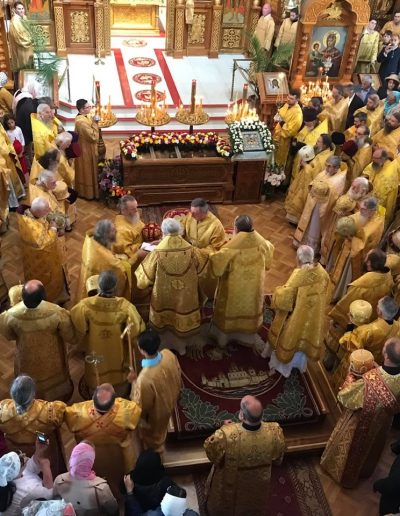 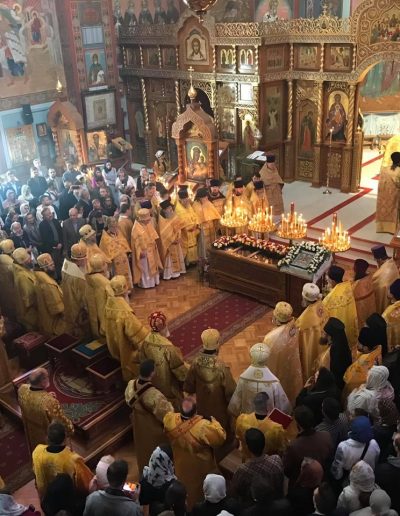 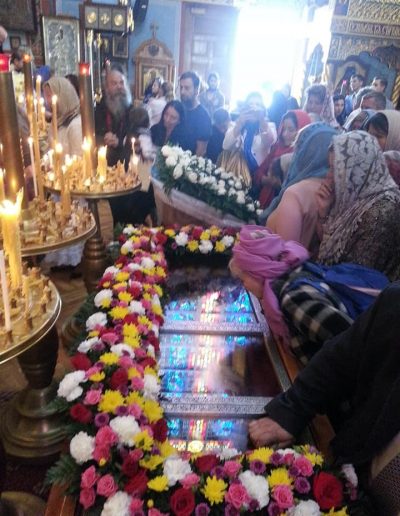 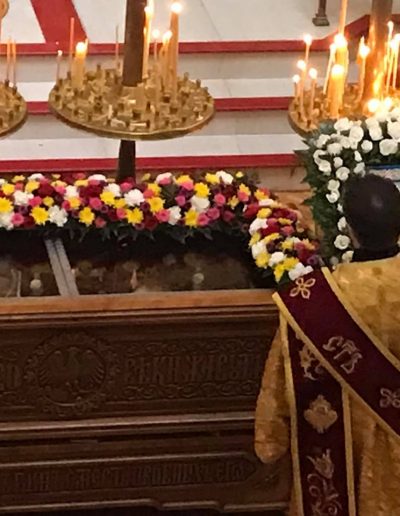 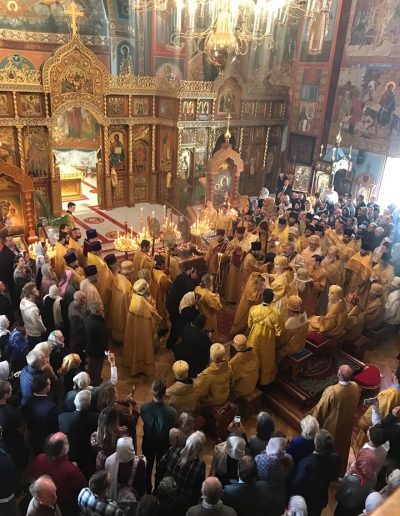 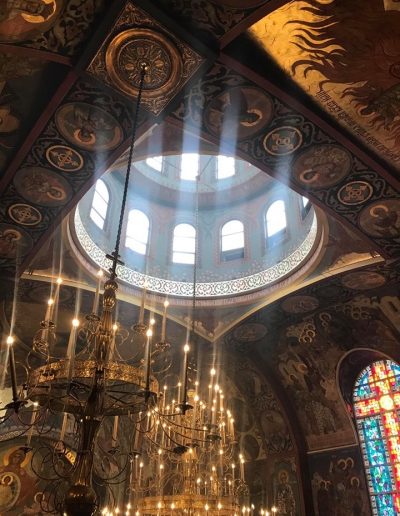 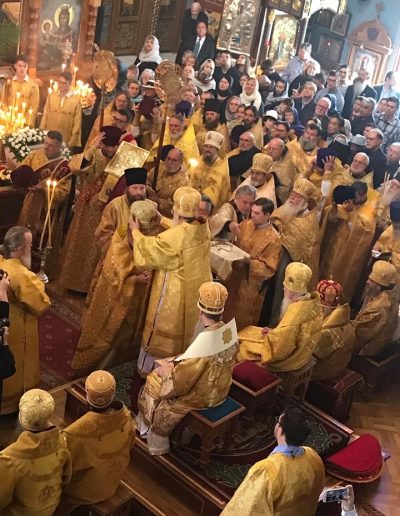 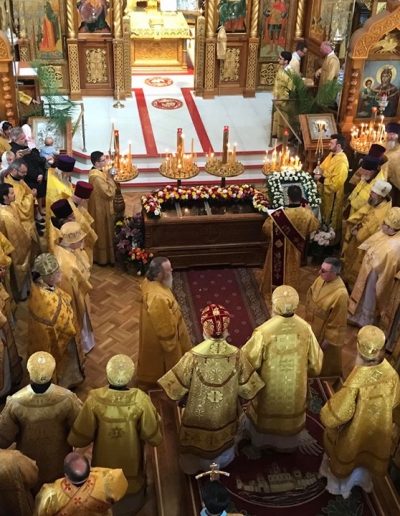 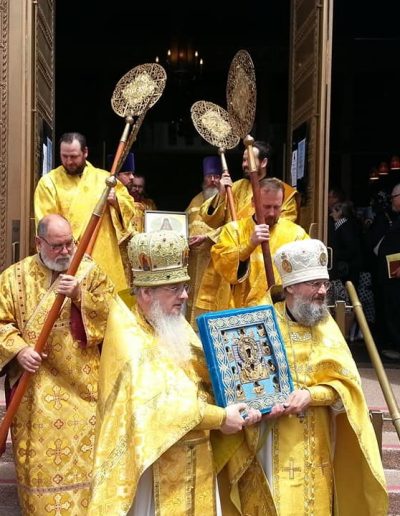 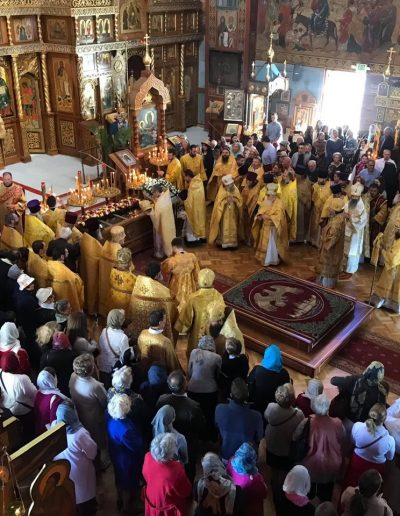 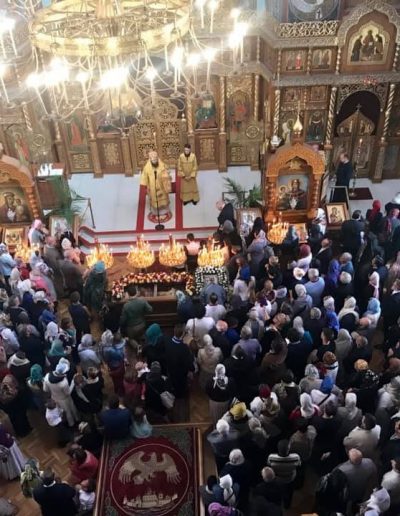